Did you know that 78% of agencies struggle to develop efficient approval processes? 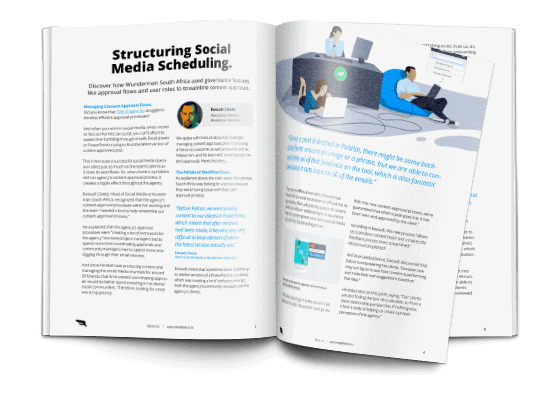 Discover how Wunderman South Africa used governance features in Falcon to streamline content approvals. Additionally, the agency discovered that Falcon enabled them to:

“The main reason we were looking for a tool was that we were having a massive issue with our client approval process,”

Before Falcon, the agency’s team was sending content to clients in PowerPoints for approval, which was creating a lot of confusion for both parties. Additionally, the team was wasting valuable time coordinating approvals that would be better spent investing in the agency’s clients’ social communities.

Through the use of governance features like approval flows and user roles in Falcon, the team found “that managing content approvals directly within the platform to be a massive time saver.”

“One of the many things that we realized when we were introduced to Falcon was that this one tool could actually replace a lot of the specialized tools that we were using. So instead of having licenses for 4-5 different tools, we could have only one.”

View All Ebooks
No items found.